Tesla finally unveiled their semi truck:
tesla.com/semi/
An electric monster with 4 Model 3 motors, one for each drive wheel, with an astounding 500 mile range (beating most people’s expectations). Fully loaded (i.e. 80,000 lbs total), it can accelerate from 0 to 60mph in 20 seconds. Unburdened, it can do 0-60 in 5s. What’s the point of this kind of performance, other than the ability to go up a 5% grade at 65mph fully loaded? In a traditional vehicle, the conventional wisdom is that an over-powered vehicle will kill your efficiency. And how can you make a 500 mile range electric truck without destroying your payload capacity?

In an electric truck, efficiency and power are related in the opposite way you might expect. The truck shaped a bit like a bullet, with a drag coefficient of 0.36 (like a sports car instead of a “barn”) and an efficiency of better than 2kWh/mile. And the insane performance?

Well, by running more motors in parallel, the effective power loss due to resistance in the coils is reduced since Power loss = I^2*R. Torque is proportional to current and number of motors, so if one motor with resistance R1 needs to generate torque T1, it requires a current I1, and thus a power loss: I1^2*R1.

But if you take the same torque requirement and split it among 4 motors, the current for each motor is now just I1/4, and the power loss for each is: (I1/4)^2*R1 = I1^2*R1/16. All 4 motors in total have a resistive power loss of 4*I1^2*R1/16 = I1^2*R1/4, i.e. a quarter of the value of just a single motor. Additionally, the heat generated would be split among 4 motors, reducing the temperature of the windings and further reducing the coil resistance.

However, there are other loss mechanisms, like friction, “windage” (i.e. aerodynamic drag from the spinning of the motor itself), and eddy currents in the windings and the iron of the magnet. However, these loss mechanisms can be reduced by clever and careful engineering of the motor. Resistive losses are more fundamental and at a certain limit, the only way to reduce the resistive loss is to add more copper (or operate at higher RPM through gearing). Anyway, the point is that having more motors can actually increase the efficiency of the powertrain by reducing the effective resistive losses in the windings. (if you’re interested in how all these loss mechanisms play out in the total efficiency of a motor, here’s a brushless motor efficiency map, showing the maximum efficiency of about 98% at relatively low total torque: 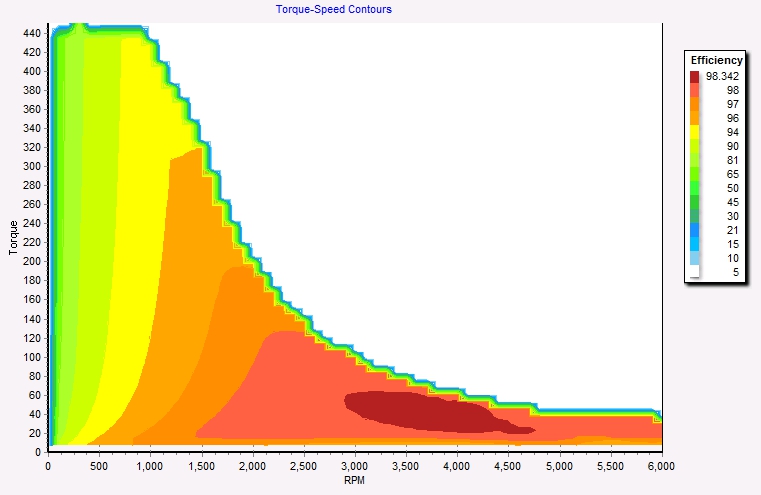 Another instance in which superlative specifications, which would seem to be detrimental to performance, actually improve efficiency is in the battery size. Batteries are not pure voltage sources but contain “internal resistance” which limits performance and reduces efficiency under load. Doubling the capacity of a battery (by, say, adding an identical battery pack in parallel) thus has the effect of halving the internal resistance and thus halving the power losses under a certain load. Therefore, unlike the conventional wisdom which states that you should use the smallest battery possible, under some metrics adding a larger battery will actually improve efficiency. At proportionally low loads, discharge efficiency can be on the order of 99% or higher (source). If on the other hand, the smallest motor and the smallest feasible battery were used, energy efficiency would be lower. Motor efficiency, as the above map showed, can drop to mid-80% efficiency or lower. Discharge efficiency for the battery can also drop to 90% or so. Therefore, using the smallest motor and battery (and then relying on, say, a fuel cell or something) would be a false economy. Tesla claims a sub-2kWh/mile figure for the semi, a figure that other manufacturers (such as Nikola Motors) scoffed at.

And let’s look in detail at the <2kWh/mile efficiency claim, starting with drag.

Rolling resistance, for our purposes, requires a constant amount of energy per mile to move a certain load. The speed doesn’t matter (much…). Whether 1mph or 30mph, if you neglect air resistance, the rolling resistance will require you to expend energy to move stuff on Earth (although less on other planets like Mars…).

This is basically the same thing as coefficient of friction, if you remember your first physics course in high school or college. Crr, the coefficient of rolling resistance, is technically unitless, although sometimes it’s expressed as kg-f/tonne-f (i.e. Crr times 1000), and sometimes it’s expressed not as a coefficient but as quantity with a unit, such as power in Watts (for a given load and speed) or force (for a given load). Unfortunately, this number seems really hard to find for typical commuter car tires (but I digress).

Some good semi tires with low rolling resistance have a coefficient of about 0.0045 (so 0.715871877 kWh / mile). But this is not an ultimate limit. A really, really good road bike tire may have a coefficient of about 0.002 (0.318165279 kWh / mile), which is in the range of rail (which has a rolling resistance–metal wheel on metal rail–of about 0.001 to 0.002 in real life conditions… although fundamentally it can be even lower). If you want to compete with rail, you’re going to have to reduce this as much as you can. But, of course, a semi truck is not a road bike.

But there is one way to get even better rolling resistance: a wider tire. Most semi trucks use dual tires on each of the four drive wheels. But it’s also possible to combine the two tires into one. A “super single” tire can have as low as 0.0034 (0.540880974 kWh / mile ), significantly better than the usual low rolling resistance semi tire. Super singles also tend to last longer, and since they have more contact surface with the road, it’s possible they also have better stopping power and even lower road wear. They also can reduce weight (in combination with alloy wheels) by up to 1000 pounds. And 0.0034 is not a fundamental limit. Physics allows you to do better, as road bike tires prove. So this may be an area that Tesla invested in, and according to some rumors, Tesla is planning to use super singles on the Semi.

That’s consistent with Tesla’s “<2kWh/mile" and with all the data Tesla has given so far and with fairly optimistic assumptions. But if they're using 55mph as a baseline instead and the more efficient tires and drivetrain with the slightly smaller trailer, then the figure could be as low as 1.16kWh/mile (meaning a 600kWh battery may even be realistic). 1.5kWh/mile I think it’s a pretty realistic figure, and so that’s what I’ll use.

Tesla announced a 1 million mile guarantee of sorts on the semi drivetrain. I assume that means 1 million miles before the battery degrades by, say, 20%. For a 500 mile battery, that's 2000 cycles. But a 300 mile battery (450kWh?) at 2000 cycles only lasts 600,000 miles until that 20% degradation. Not only that, but since you're loading the battery more relative to its capacity, it might not even last 2000 cycles. So what I think they'll probably do is put a slightly larger battery in there than you might think. Perhaps they increase the battery size to 500kWh to give more margin, thus reducing the depth of discharge slightly and giving room for a little more degradation before your range is reduced too much. That gives a cost of about $120/kWh, which even gives room for profit (imagine that!). But even that kind of number will leave many analysts incredulous. "Breaks the laws of batteries" they'll say: bloomberg…tesla-s-newest-promises-break-the-laws-of-batteries

And I say balooney. Tesla is selling the Semi with initial release in 2019. But they're going to start with the more-expensive, early-adopter $200,000 "founder's edition" semi. So getting to $120/kWh isn't required right away. Ramp-up may be relatively slow, and so let's say they don't start delivering the regular semis until 2020, maybe 2021. Even GM expects to have battery cell prices down to $100/kWh by 2022 (with pack costs estimated by GM at about 20% more). And a cost of $109/kWh for a battery like the one Tesla is using is consistent with Argonne Lab’s modeling BatPaC 3 for 500,000 units per year of 90kWh each: greentechmedia…How-Soon-Can-Tesla-Get-Battery-Cell-Cost-Below-100-per-Kilowatt-Hour
Since Tesla is also going to be selling a bunch of Model 3s and Model S/Xes and PowerPacks and PowerWalls by then in addition to 5 years of chemistry improvements since that analytical model came out, it’s fully realistic that the learning curve will allow a $120/kWh figure to be achieved. Elon Musk has long predicted a $100/kWh figure once the Gigafactory was fully operational. That’s basically why the Gigafactory was and is being built. I think the biggest reason people have a hard time accepting even a $120/kWh figure (let alone $100) is that it breaks a lot of their dearly held notions about energy. At that price (and combined with solar cells at 19 cents per watt at the spot market), anywhere with sun is going to have cheaper energy than fossil fuels (unless you’re right above a gas field or something). But that’s a topic for another post. I will need to address the 7 cents per kWh that Musk promised.

EDIT: Thanks to comments by James who pointed out I missed the factor of 0.5 in the drag equation. That makes the whole Tesla semi project way easier and should give Tesla a decent profit opportunity. It means only $120/kWh is needed and shrinks the required battery, which reduces the weight considerably and also thus reduces the required charging speed.