There is much discussion on the best habitat to deliver to the Moon. Dragons, inflatables, and modified propellant tanks as well as methods for renovating lava tubes are really just a start on the discussion. There have been a number of thoughts on some form of in situ construction as well primarily of the tunnel digging variety. This is an in situ materials building concept.

Start with an exterior mobile form for the outside of a tube similar in thought to a concrete slip-form. It is sketched in blue in the cartoon. The red section at the bottom of the structure is the heat source that vaporizes the lunar regolith so that the vaporized iron rises to condense on the inside of the slip-form in a vacuum deposition building process. The liberated volatile gasses build up in the completed tube until enough concentration exists to compress them into marketable  volatiles in the vicinity of the airlock pictured in green. With the pressure in the extrusion section never exceeding a fraction of a psi, the slip-form will be able to move on when the shell is just millimeters thick with the remainder of the vacuum deposition to be done against the incomplete tube.

The airlocks are moved toward the construction zone as the tube extends onward. Every time the airlocks move forward there is more living and working space for the Lunar settlers. Only after the metal is thick enough to handle the weight is a few meters of regolith piled on it for radiation protection and thermal control.  It seems just possible that the vacuum deposition tube extruder could be debugged on Earth and made simple enough to require very little human maintenance and supervision. It just might be possible to prebuild living volume robotic-ally before the first settler even lands if the concept could be made simple enough. 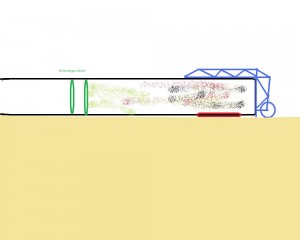 Three dimensional printing has been getting a lot of attention lately for building on the moon. I think the printing will be more effective for furnishing the finished tube quarters leaving the heavy construction to simpler and cheaper brute force methods. Once one tube extruder has been shown to work in real lunar conditions, the printers might be best used producing more extrusion slip-forms and power sources in a Von Neuman scenario. Lunar colonists could be faced with an embarrassment of volume riches if the machines are effective enough.

Extrusion of planned settlements could follow whatever plan seems best for the uses intended. One long tube might be considered best in one place while a snail spiral might be preferred somewhere else. One group might best be served by a main street central tube with others laddering off at intervals while another might just think in terms of a wagon wheel layout with all traffic passing through a central hub. tube roads might be feasible if sufficient speed of construction is demonstrated.

The heat source to vaporize the regolith inside the slip-form area can be nuclear or solar depending on the available technology and the political climate when the project is started. If solar, construction would be during the Lunar day by necessity. If nuclear, then night construction might be best so as to be able to radiate the excess heat that would be a necessary byproduct of this construction technique.

Solar powered construction in the daytime would have an enormous waste heat problem without normal convection or fluid conduction available to carry off the excess. It might be possible to shade local areas of regolith from the daylight in order to preserve the cold temperatures reached during the Lunar night. These protected cold traps could be used as heat sinks for the excess heat transported from the building projects. Better would be if the excess heat drawn off from the construction could be converted back into electricity that could in turn vaporize more regolith for the extrusion. Even a 10% efficiency would reduce the required cold trap volume and the required solar collection requirements.

The volatiles liberated during the construction would be possibly more valuable than the structures themselves for both rocket propellant and living requirements. The market for volatiles may even drive the trades toward super heavy tube walls that are just a byproduct of the industrial extraction of valuable export material.

If this were to work on the moon, it could obviously be adapted to Mars and the asteroids to create in situ buildings throughout the solar system.