Quite often some form of bulldozer on the moon or Mars to dig ores or cover habitats is suggested. There seems to be a meme out there that the best way to move sandy gravely material is similar to the way it is done here on Earth. It is sometimes suggested that this moondozer will have to be weighted down to get sufficient traction to dig up the packed lunar regolith for mining or radiation protection.  A better approach might be to design a more limited machine for a specific type of task. Such a design effort might profit by looking at older technology that was in use before the availability of large reliable diesel engines. People that had to do things with a ten horsepower engine that weighed a ton* or more had to find ways of applying that power.            *On display at Florida Flywheelers park in Ft Meade FL.

One reason for looking at other techniques are shipment costs from Earth at  a hundred grand or so a pound, depending on assumptions. My small Caterpillar rubber track loader weighs about seven thousand pounds.  Seven hundred million dollars to deliver a machine that won’t even work properly when it gets there is a show stopper. It would weigh about twelve hundred pounds on the moon which wouldn’t provide enough traction to dig up packed soil.

The second main reason is the problems of a mobile power plant in an airless environment. Even if you put an electric motor with the same power in my loader, it would need a massive extension cord to deliver voltage for a sixty horsepower engine. That or a massive battery pack that would be even heavier and more shipment cost. Heat dissipation from both the electric motor and extension cord would be a problem with no air to get rid of the excess heat.

The traction issue would be as large a problem as the heat dissipation unless a few tons of ballast were added to the loader. The view of most equipment designers I’ve talked to seems to be that ballast is a sign of poor engineering. Whether that is totally true or not, it remains that carrying excess mass costs energy and causes equipment wear.

My excavator weighs about the same as the loader and would have many of the same problems. Anyone that has ever tried to dig hard ground with an excavator or backhoe will understand that the machine needs weight to hold it down. Then the material has to be transported to the ore processing facility  or habitat being covered. Excavators do poorly at material transport.

Robots of smaller dimensions will certainly be used in the early stages. Moving a hundred tons of material with a hundred pound machine is certainly feasible in a lunar day. The problem is that even the smaller robots have the same drawbacks as the larger machines.

An older tech that is still in use is the pan type machine. Still in use today hauling millions of tons of material around mines and construction sites, they started out much smaller behind horses. In the simple description, a pan is a box with four wheels and an open end. The horses, oxen, or tractor drag the box along the ground with the open end first. As the box fills, it adds weight to the pan, which both makes it harder to pull and adds ability to dig deeper. When the pan is filled, the box is raised just a bit to clear the ground and the material is transported to the material dump site. At the dump site the bottom of the box is opened so that the material falls out in the right location. Different techniques like shovels or bulldozers are used to push the material the last few feet when desired.

A different old tech is a stationary traction engine pair. A steam engine, windmill, or early internal combustion engine at a fixed location pulled a cable across a field. The plow or other farm implement attached to the cable was pulled across without the need for wheels or tracks that could supply the traction. The best current mind picture would be a couple of fast winches on opposite sides of the field to drag the implement back and forth. As clumsy as this method is to us, it was an advance on feeding and tending livestock year around in some parts of the world when they could only work a few months a year at best.

For a Lunar regolith mover, I suggest a single traction engine at the mine or habitat site that pulls a simple pan to gather regolith and pulls it right up to the stationary location. The traction engine can be powered by solar or nuclear power that also serves the base. A tiny electric motor on the pan just sufficient to move the empty pan reverses to the back of the digging area before the next regolith pull. The traction engine can serve two or more pans by pulling in one while the other reverses for its’ next load. 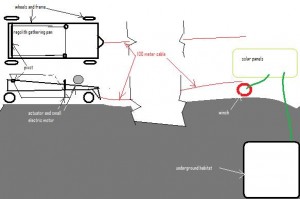 The first landing with telerobotic pans and traction engines could well total under a ton. A few pans that weigh ten pounds or so each with a similar mass of cable could be used to test gather material to the stationary lander. A ten pound pan could gather fifty pounds or so of material on each pass. At ten miles an hour and a 300 foot radius, each pan could make seven trips an hour. Two pans could gather seven hundred pounds of material an hour for a total of about a hundred tons during one Lunar day.

The stationary power source could be shielded by the first lunar night with regolith which, sun heated, could keep the machinery warm until sunrise. If nuclear powered instead of solar, it could run an active base on a constant basis. A pre-landed human base could be radiation protected by a very small system in a fairly short time. Given a few cycles of small development, a large mining operation could be assured of reliable large scale gathering on the first try.

After development and test on the moon, it should be considerably easier to engineer soil movers on Mars and other low gravity, no oxygen bodies in the solar system.