SSTO is a bad idea, but NTR SSTO is worse

A few months ago, I spent some time describing some calculations of payload fraction that I derived to assist in the design of rocket vehicles. My motivation for getting into this type of work came about from my work on the X-33 rocket when I was an intern at the Skunk Works. I wondered how so many people could think that SSTO (single-stage-to-orbit) was a good idea when the mathematics argued against it. Right after I joined NASA, in early 2000, I was in a group that was looking at some really advanced concepts, and somehow or another, we got looking at using nuclear thermal rockets for an SSTO vehicle. At first blush, the whole idea seems to make sense. Nuclear thermal rockets offer almost twice the specific impulse (Isp) of chemical rockets, and if an SSTO doesn’t have enough Isp with chemical rockets, then surely nuclear rockets must be better, right?

Nuclear-thermal SSTO turns out to be one of the worst ideas anyone has ever come up with, for two simple reasons: hydrogen and the lousy thrust-to-weight ratio of nuclear thermal rockets. Those are the same two reasons that make NTR lousy or marginal for nearly any other space application as well, but this post will focus on the issues surrounding NTR SSTO.

In the case of any earth-to-orbit vehicle, you’ve got to have the thrust to get off the ground in the first place. Let’s assume that we’re dealing with a vertically-launched NTR SSTO. It has to have a vehicle thrust-to-weight ratio greater than one, and probably a fair bit better than that in the first place, just to get off the ground. So we can take those expressions that I derived before, assuming hydrogen as a propellant and the engine thrust-to-weight ratios that have been quoted by NTR proponents like Stan Borowski to quickly try to figure a payload fraction for an NTR SSTO.

We find the propellant-mass-sensitive term (derivation here) assuming the liquid hydrogen has a density of 71 kg/m3, ullage of 3%, a mixture ratio of zero, and a tank structural mass factor of 10 kg/m3. This gives us a value of 0.1452 for this term. 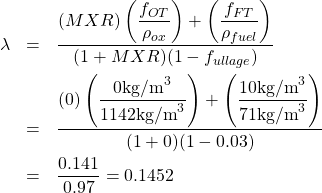 We find the gross-mass-sensitive term (derivation here) by assuming that the engine has a vacuum thrust of 15000 lbf, a weight of 5000 lbm, and vacuum thrust-to-weight of 3 to 1. I’m not even going to “ding” the engine for sea-level performance, since as we’ll see, it won’t even matter. With a vacuum T/W of 3 and the same for the sea-level T/W and an initial vehicle thrust-to-weight ratio of 1.25, and we’ll just say that the thrust structure doesn’t weigh anything either, the gross-mass-sensitive term comes out to be 0.4167.

We’ll also ignore any recovery hardware (wings, landing gear, TPS, etc) and say all that weighs nothing. We’ll assume that the engine has a vacuum Isp of 900 seconds and that it takes 9200 m/s of delta-V to get to orbit. 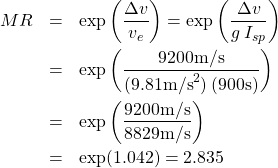 Plugging those numbers in the rocket equation gives us a mass ratio of 2.835 (very good!) and a propellant mass fraction of 64.73%.

We start out with the final mass fraction (1 – prop mass fraction) of 35.27%. It doesn’t get any better than that. Then we subtract the gross-mass-sensitive term (41.67%). Now we could stop right here, because we’re already negative (-0.064). That is to say, even before accounting for the issues with tankage, we’re already out of performance. The engines weigh too much. But we’ll keep going and subtract the product of the prop-mass-sensitive term and the propellant mass fraction (0.6473*0.1452 = 0.0940) and we end up with a payload fraction of -0.1579.

So it’s a no-go with these engines. Our payload fraction is grossly negative and we’ve got nothing. It’s clear from the magnitude of the numbers that the engine thrust-to-weight ratio is the main culprit, although the “fluffy” liquid hydrogen tanks don’t help much either.

So what kind of engine performance would you have to have to get even a zero payload fraction? Well, I ran some rough calculations based on a variety of speculative vacuum T/W ratios for some putative NTR engine, at a few different values of specific impulse and plotted the results here:

The graph tells the story. To get payload fractions of zero (a launch vehicle of infinite size) you have to have a T/W at 900 sec Isp of over 10. That’s more than three times the T/W that Stan Borowski projects for his sporty 15K NTR design, which he says will have a T/W of 3. So if you think that Stan or others can design an NTR that only weighs a third of what he thinks it will weigh, then you can dream about an NTR SSTO of infinite mass.

As for me, I’ve thought for some time that NTR was a really bad idea for almost every application for which it is considered. The SSTO application is probably the worst.

37 Responses to SSTO is a bad idea, but NTR SSTO is worse