Ok, last week, when I first got sent the link to the Atlas-V man-rating paper, I noticed that they mentioned using Atlas V for space tourism. I started writing this blog post Thursday morning before the big Lockheed/Bigelow announcement, but hadn’t had a chance to finish my analysis. I mentioned that I would try to finish this though, so here’s what I’ve got:

When I first noticed the idea of using Atlas V for space tourism, I was fairly skeptical about its practicality, but I figured it’d be worth taking a look at the numbers and seeing if there is an even remotely plausible way they could make it work.

So, for this excercise in numbercrunching, we’re going to use the rehash of the Futron study that t/Space did way back in their CE&R report that I talked about on the blog last year (relevant numbers start on page 44 of the post). The Futron study isn’t perfect, can’t tell us how many people will actually buy, and has all the caveats and exceptions you would expect from any marketing study. You can’t prove a business will succeed just based on analyzing market studies, but you can at least get a feeling for if the idea is even feasible.

Ok, so first let’s look at pricing. How cheap could Lockheed really afford to sell tickets on an Atlas V? The first key piece of the conversation is the point made in one of the Lockheed papers (which for some reason is no longer linked-to from the main Atlas-Yesterday, Today and Tomorrow page): very low flight rates drive costs up substantially. While it’s fairly well understood that higher flight rates are better, I think that Figure 6 from that paper illustrates the point rather well: 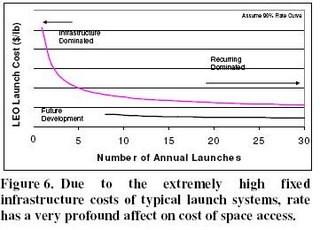 A lot of people have commented on how Atlas V’s “cost” $138 million each right now, and that thus they would be way too expensive for commercial tourism. But this ignores the effect of flight rate on costs and prices. Basically, there’s certain fixed costs that have to be paid every year regardless of if you launch once, twice, or twenty times. You need to keep engineers on staff, pay for upkeep of your pad and factory, pay leases on your manufacturing equipment, etc. At very low flight rates, all of that has to be divided up between only a few launches. As more and more launches occur, the cost per launch ends up trending downward to the marginal cost per flight, which for EELVs includes the marginal manufacturing cost of one extra vehicle. One thing to note is that even the marginal cost goes down as you make more of something due to “learning-curve” effects among others.

So, while the average Atlas V 401 mission runs about $138M right now, if they got back up to the flight rate originaly envisioned (about 6-8 a year IIRC), the prices would likely be able to drop back to the ~$72M per launch that they were originally offering. It’s interesting to realize that if they were offering the Atlas V 401 at $72M, it probably means that their internal marginal cost per booster is much less than that number. Possibly as low as $30-40M. So, at current flight rates, they’re charging about $138M each (for 2-4 per year), which would likely drop to $70-100M if they got back up to 6-8 flights per year, and possibly as low as $50-70M each if they got up to 15-20 flights per year. If they had sustained demand for 15-20 flights per year, they could probably reinvest some money into more streamlined manufacturing and operations (ie adding more automation, building extra pads, etc), and might be able to push those numbers down a little bit farther. However it’s really not clear how much lower than $50-70M they could push their prices without impacting their bottom line.

For comparison, their 2-4 launches per year is probably netting them somewhere between $300-700M per year (average mission price of say about $175M). Aren’t they also getting a $500M per year subsidy from DoD every year just to stay in the launch business? So that means they’re making $800-1200M per year off of their Atlas V line. At $70M in revenue per flight, that’s $1.4B per year (unless they can somehow trick the DoD into continuing to pay them a subsidy for their existance–don’t laugh if anyone can pull that off, it’s Lockheed), which is only a little better than they’re making launching 4 flights per year. Now, if that subsidy went away (say as part of the ULA merger or something), then the $1400M in revenue would be a big improvement over the $300-700M they’re making before subsidy.

So anyhow, I think there’s a decent case that if LM really could get most or all of the Bigelow Sundancer/Nautilus business, that they could get the Atlas V price down in the $50-70M range, and possibly another $20M for the capsule leading to a roughly $10M ticket price assuming the 8-person capsule LM mentions, with 1 crew and 7 paying passengers.

So how much private demand is there likely to be at that price? Unfortunately the numbers don’t look very good. As t/Space points out, wealthy individuals are unlikely to spend more than 1.5-5% of their net worth on a vacation. What that means is that for a $10M ticket to be less than 5% of your net worth, you need a net worth of greater than $200M, which puts you on par with Tito and Shuttleworth. According to the numbers at the time of the Futron study, there are about 6000 households in the world with that much net worth or greater. Once you factor in the percent that are likely to be interested, that are in good health, and all other factors, you’re down to a probable market of around 1000 people. In order to drive demand up enough to drive your price down to the $10M range, you need 15-20 flights per year. If say 10 of those per year were passenger flights, that would require 7% of the total potential customer base per year to want to fly. While that is possible, I’m not sure how realistic it is.

In order to really get demand high enough that that kind of flight rate isn’t unrealistic, they’d need to drop their ticket price by another factor of 2 down to $5M. At that rate, you could realistically see dozens of people flying per year in the relatively near future. However, at $5M per seat, that would imply that Lockheed could sell an Atlas V flight and the accompanying passenger vehicle, at a total cost of less than $35M. Somehow I don’t see that happening.

So yeah, Atlas V could possibly be a decent vehicle for space tourism, but probably only if it had no competition, and a lot of luck in marketting rampup. Not to mention dealing with their corporate culture issues–transitioning from a business that makes most of its money off of government contracting to one that is mostly commercial oriented is not always an easy or smooth process.

Anyhow, what do you all think?