If You’re Going to Be Snarky…..

One of my pet peeves with a lot of other space writers is people who get all snarky and condescending about a topic that they really don’t understand. [Note: Before anyone accuses me of hypocracy, I’ll admit that I probably do this quite a bit myself.] The latest case in point is Jeff Bell’s most recent article.

Now Jeff is an interesting character. He often does make at least one or two valid points in any given article, but then tends to go off flaunting his ignorance. In his latest article, he takes space settlement supporters to task for being “shockingly ignorant about space technology”, and for not doing their homework. As he puts it “The first thing you do when you become obsessed with something is study it obsessively, right?”

Jeff actually has a good point. A lot of the people on space fora start out as clueless newbies. I sure did. And due to the glories of the internet, anyone with Google can amuse themselves at the silly things I said as I worked my way up the learning curve. There is in fact a large amount of information that I still don’t have completely mastered.

I know a lot about the concepts of orbital mechanics, and have a little bit of an intuitive feel for roughly how things work (thanks to patient people like Henry Spencer and others who’ve taken the effort to explain such things at length over the years), and I have been able to make some useful extrapolations from that. But writing a trajectory analysis program? Yeah right. Doing any sort of real analysis not based on empirical data created by others who’ve looked at similar problems? Not yet. As Jeff points out, there is fortunately a lot of that kind of information out there publically available on the net. If you want to know the delta-V required for a trip from LEO to L1, you can get a reasonable number from many locations, so long as you make sure your system is similar to the system the number was calculated for. Calculating that out though for a specific system is completely beyone my skillset.

I also have a decent understanding of the qualitative issues involved in the heat transfer and thermodynamics of a rocket propulsion system. I work with them every day at work. But actually setting up all the equations to do detailed analyses is really something that I’m only now starting to get decent at. Fortunately Pierce and Ian are much sharper in that area, so we complement each other.

The problem I have with Jeff is that after making this fairly accurate statement, he then makes the very mistakes he accuses others of. If you’re going to be snarky and condescending, make sure you’re actually right!

Jeff decided to make his point about how clueless the space settlement crowd is by ripping on this picture, titled “The Ultimate Sandbox”:

I have to admit, ever since I first saw this picture a few years ago, I rather liked it. So when I saw Jeff waxing indignant about it, I was mildly amused. In trying to condescend us ignorant space settlement fanatics, one of the four arguments Jeff made was that:

No child could grow normally in the low lunar gravity. Even adult astronauts are carried away on wheelchairs after only 6 months in space (the last American to return from the ISS actually fainted from the stress of normal gravity).

Back in the 1970s, you never saw this misleading and emotive propaganda image. It was clearly understood back then that permanent colonization of the Moon was impossible due to the debilitating effects of low gravity (which had just then been discovered on the early space stations Skylab and Salyut).

The mistake Jeff makes is that in reality, we really have absolutely no data about the long term effects of lunar gravity. We have lots of data about the effects of microgravity (often mistakenly called zero-gravity), but almost no data between there and standard earth gravity.

This may sound like splitting hairs, but it brings up an important point. With data points at only the end points of a curve, you can’t say anything about the curvature of that curve. At least not with any confidence. For example, what if you plotted on the X-axis the gravity at which a person was living for an extended duration, and then on the Y-axis could plot some sort of metric that could quantitatively represent the general health of the individual, maybe something like bone mass for instance. If you normalized the Y-axis a bit, you might be able to make a chart like the one shown below. The question is, what should the curve look like between the microgravity data points and the terrestrial gravity data points? 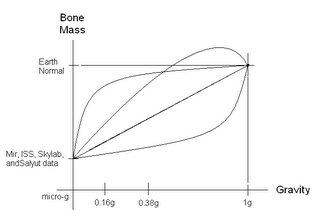 The best answer we can honestly give at this point is: we don’t know.

The only way we could know for sure what the curvature looks like would be to get data at intermediate points. In statistically designed engineering experiments, it is common to take data at a centerpoint. If you’re expecting a more complex curve, you may need to take data at many intermediate points. Only then can you state with any sort of real confidence what the effects of “low gravity” are.

One could reasonably ask what evidence there is to assume that long-term exposure to lunar gravity would be substantially less debilitating than long-term exposure to microgravity. Or, why shouldn’t we assume that the curve is either straight, or has positive curvature (ie the curve that starts out nearly horizontal, than curves upward toward the terrestrial data point as it approaches 1g)?

It turns out there actually are some reasons.

While I’m not an expert in the effects of microgravity on human physiology, I have at least tried to study the topic as much as has been reasonably possible. From various sources, including lectures given by experts in the field, it turns out that one of the key effects of microgravity on the human body has to do with fluid distribution. In normal gravity, blood and bodily fluids tend to be pulled downward towards our feet, but in a microgravity environment, those bodily fluids tend to redistribute themselves throughout the body. The result is that the fluid volume in the head increases, and the fluid volume in the feet and legs decreases. Our body doesn’t like that. The sensory organs that detect fluid volume in the head misread this increase as being an increase in total fluid volume in the body, triggering diuresis. In other words, you pee. This diuresis continues until the fluid levels in the head return to earth-normal levels. The problem is that by the time they do so, the total fluid volume in your body has been substantially decreased. Your body also has systems that try to keep the concentration of various minerals in your body within certain bounds. If you get too high of a concentration of some materials, your body tries to reject them. Combine the two effects, and not only do you end up decreasing your body fluid volume, but also the total amount of calcium and other minerals that your body will naturally contain.

It’s not too surprising when you look at it this way that many of the debilitating symptoms of microgravity exposure are similar to mineral deficiencies (particularly calcium difficiencies). Stuff like osteoporosis, heart problems, muscle and nerve issues. Calcium doesn’t just strengthen bones, it is also an important electrolyte that has lots of other functions throughout the body. While calcium loss and fluids loss probably don’t explain all of the major health issues caused by microgravity, they do appear to be a significant part of the problem.

Why do I bring this up? Because if many of the worst effects of microgravity are caused by fluids distribution, even a little gravity may go a long way. With rocket propellant tanks, even .01g is more than enough to fairly quickly settle the propellants and force bubbles to the top given sufficient time. Is 0.16g enough to keep your body fluids where they would be in a full 1g environment? I don’t know. I imagine it could probably be modeled somehow, but that’s beyond my area of expertise.

As a quick digression, there is at least some anecdotal evidence that at least one of the serious health issues with microgravity, insomnia, is not a problem in lunar gravity. I don’t have a source on this quote, as it was a while back that it was related to me, but supposedly, at least one of the Apollo astronauts described his sleep in the LEM as some of the most restful he had ever had. Apparently the combination of having a real gravity vector, but one that was much lighter than earth made sleeping in a hammock very comfortable. While that alone doesn’t prove that the curve above has negative curvature, it at least provides some support for the potential validity of the hypothesis.

One problem with trying to actually firmly prove or disprove the hypothesis is that many of these symptoms take a bit of time to manifest themselves. There might be a way to simulate it via various bed-rest analogs like they have done in the past for studying microgravity effects. The timeframe between exposure to microgravity and when the diuresis kicks in is usually on the order of a couple hours, so that’s too long to study on a vomit comet or a suborbital ride. Studying it in orbit would require a fairly large centrifuge (much larger than the one planned for ISS). Honestly the best way would probably be to study it on the Moon directly. There’s no substitute in the end for research in-situ.

I could say more, but I’ve probably gone way over-length on this post already.

20 Responses to If You’re Going to Be Snarky…..